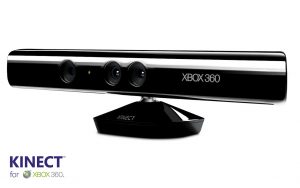 What’s all the buzz in the Xbox 360 Kinect!? Furthermore what exactly does it do, and how does it enhance game play?  Is the Kinect cost friendly?  So many questions for this Xbox 360 add on, but we have the answers, all of the answers.

The kinect is a peripheral camera that attaches to the usb port on your xbox 360 console.  Once connected it allows players to use a combination of body movement and verbal commands to control games without the use of a controller.  It essentially allows players a broader range of movement and versatility while gaming and just watching TV.  Microsoft has said that it is the next big thing for gaming and is more than just the cameras and microphones that it is made up of.  In fact it’s a type of sci fi technology with its ability of facial and voice recognition. The Kinect is made up of a horizontal bar that houses a RGB camera, Multi array microphone, and depth sensor.  The bar is connected to a motorized base which combined allow for a 3D motion capture.  With facial and voice recognition it allows the player to either play video games or watch TV without the use of a controller.  You virtually don’t have to lift a finger.

How does it feel playing a game without a controller? In general you seem to need a lot more space when playing Kinect games.  As well as, some Kinect games feel as if they would be better played with the use of an actual controller.  It is a unique experience to go remote free using body movement and voice command instead.  However this being said the Kinect does come at a steep spend of $150 dollars.  Some are questioning whether the fee is worth it for this piece of new technology.  While the 3d cameras are definitely something awesome and voice recognition is pretty cool, some may say that this new gaming piece makes the xbox 360 similar to the Wii.  Not to mention do you have to have Kinect specific games in order to use the device?   Yes there are Kinect specific games that are available to be purchased aside from the device.  However the Kinect and its $150 cost do come with a kinect game, Kinect Adventures.  So what games were launched that are compatible for the Kinect?

What it comes down to outside of the facts on this device created with the latest technology, is where you want to go as a gamer.  Are you interested in this out of the norm concept that may enhance your game play, or perhaps change the dynamic of it.  If you are willing to shell out the cash, why not explore the new side to gaming technology!