How dedicated of a gamer are you? Sure you love to game, you may have top of the line gaming console(s), the best headset, controller, and so on.  But are you dedicated enough to have a gaming inspired swimming pool?  Well we found someone who is the ultimate gamer and thought we would share .  A buddy of mine that owns www.poolremodelphoenix.org, took me to a fun BBQ and told me about this insane gaming controller shaped pool he added to a guys residence complete with gaming controller floatation devices! Crazy! 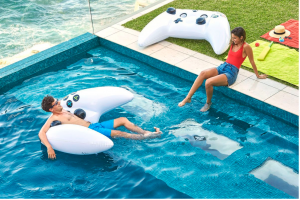 Paul, the owner of the pool, owns an IT firm and loves gaming. Recently when he purchased a new home in Phoenix he decided he needed a pool.  With summers reaching up into the high 100’s and you live in the middle of the desert who doesn’t want a pool to jump in and refresh.  Ok so was this going to be regular type of pool or was this pool going to exceed limits and stand out.  Known to throw some pretty epic BBQ’s complete with gaming cabanas poolside, in his last home, he was about to reinvent those pool parties.  That’s when he contacted my buddy Brian to build him a pool.  When asked if he could build a gaming controller shaped pool, Brian was a bit thrown off.  He’s done lots of pools but never one quite like this! He was up for the challenge and it turned out great!  When the pool was finished and set to be used, Paul threw probably the most insane pool part yet. With gaming 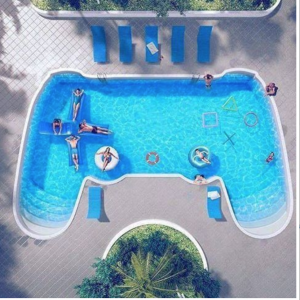 cabanas laced throughout the backyard, huge game controller resembling floaties, great food, and his close gaming friends, Paul really through a great house warming.  I was able to be a guest with my friend Brain and see this amazing pool for my own eyes.  It was incredible if I must say.  This guy is the ultimate gamer and has my respect!  When I told him that I write a xbox gaming blog and asked him if I could write a piece about his pool he was more than happy to oblige. In fact he gave me some great pictures to share with you all so that you could see it for your own eyes too.  Game On! 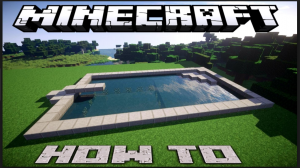 But wait….I didn’t stop there.  My interest was peaked and I thought to myself, if this guy went  to these extremes with his gaming obsession what are some other crazy decorating swimming pool ideas might a gamer have. So, what if someone were to design a pool in MineCraft and then recreate it in their home backyard!?  How awesome would that be.  Here are a few image of what I think would be a cool MineCraft replicated pool idea.   Please feel free to drop your opinions in the comments.  Who knows, maybe one day I might do it myself!